I finally got to play the AVP demo on PS3.

Rebellion have noted that they have stuffed up on the PS3 matchmaking which is why the connection never happened and things start to be improving (games can now connect, takes about 5-10 mins – but it’s better than never and waiting for over half an hour). I also managed to play some games with my friend Andrew and while my first go at the game left me feeling underwhelmed the subsequent goes I’ve felt better about the title as I’ve gotten more play time with it. 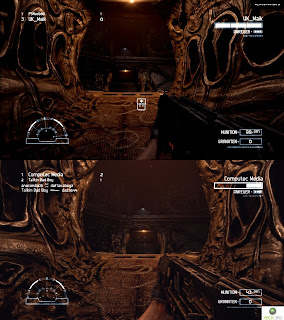 In movement the game seems to lack on the PS3, but visually screen-shots themselves show very little difference – as the above shot stolen from online – shows. It’s a shame really and I assume it has solely to do with frame rates and AA, and hopefully the Digital Foundry will eventually explain reasons once the game launches later this month.