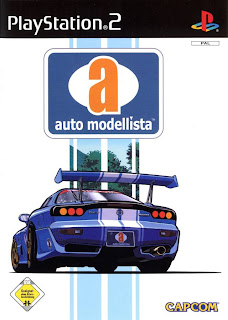 Auto Modellista is an odd little gem that turned up on my doorstep thanks to the late great PSM magazine. Several years ago I entered a competition to win a Capcom prize package, and amazingly I won. The item which turned up on my doorstep? A Street Fighter t-shirt and 3 games. The games were the awesome Onimusha 2, the odd Dino Stalker (aka Gun Survivor 3), and the crazy (and also odd titled) auto modellista. 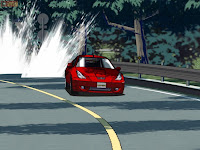 Interestingly this is Capcom’s first (and only still) racing game that they’ve ever made. Considering they managed to licence a number of brands and car types, they did an exceptional job and I can only guess a lack of overall sales may have been the cause as to why they never made a sequel or any other games like this. 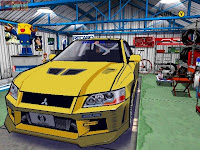 The game itself is fairly simple. It’s a mix between arcade and sim, focusing on officially licensed parts and a balance system in the garage in which you tune your car to the best for the upcoming race. This however goes against type and gives you cell-shaded arcade style gameplay.
Provided you’ve tuned your car correctly, you’ll be drifting and power sliding your way around corners, splashing up marks behind you like in the photos shown. 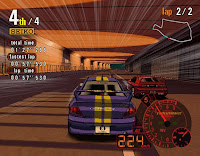 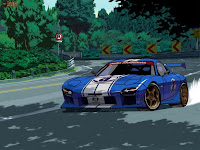 My friend who saw the game said Capcom nailed what should have been the Anime ‘Initial D’ look which surprisingly the officially released titles hadn’t actually managed to do. I’ve never seen the series myself, so I can’t comment greatly, but looking at the games online they look very standard.

The other interesting thing about it is the replay theatre option, which went beyond the standard editor and allowed you to mix in various visual elements and grades over the top, which wasn’t something often seen. The outcome, mixed with the cellshades, made something of a music video out of your replays. 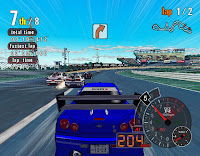 Sadly the game lacked a lot of depth. Aside from unlocking all of the cars and extras, there was a very limited number of tracks and the version in PAL areas lacked the Online play.

The US had a delayed version which went multiformat and included extra unlocks, cars, modes, and the online play. The game was re-released in some countries as “U.S. tuned” which added these features back into the game for those markets, however it was never released over here and thus I never picked it up.

I currently still own the game, however it will probably end up on my sell pile at this stage as, while doing the guide, I’ve basically played through everything I could in the game. It’s a great quirky little title and I suggest if you get the chance to play it then definitely do so, I don’t think you’ll regret it.