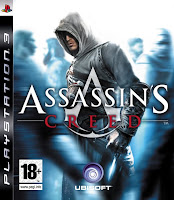 Assassin’s Creed (‘Screed’) seemed to pop up for most people early when the game was being shown around the new style E3 and other trade shows, but I seemed to miss it. The excitement was over a historic stealth assassin game based on extending out abilities Ubisoft Montreal had done with Prince Of Persia. The final game was anything but…. however, we’ll get to that in a second. 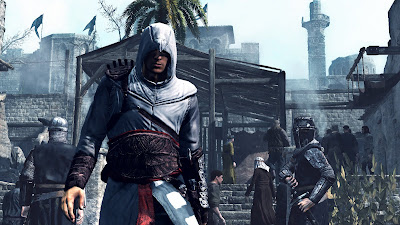 My friend Andrew knew more about the game than I did, and had pre-ordered and purchased the collectors edition for X-Box 360, which over here sadly came without the super detailed Altair figure (something fixed by the time “Screed 2” arrived). However once he actually played the game he didn’t like it. I saw a few mins of it at his house and thought it was okay, but had no real burning need to play it. In fact the only thing I think I knew before the game came out was due to the fact that Kristen Bell had blabbed about the fact that, unlike what the trailers showed, the game was actually taking place in the future and you were enhabiting the DNA embedded memories of people.

However a few months later, wanting to rent something for a day from a local video shop and with little else to choose from, I picked up the PS3 edition and managed to enjoy a number of hours playing it. So much so, that when I saw a copy on sale for half price (well before it was off being full price – but you can buy it now for about $30NZD in some places) I picked it up.

The game play mechanics seemed to have started at an idea of extending the Prince’s acrobatics and instead moving them into something which was a little bit more like Free Running, mixed with crazy wall scaling. Visually and gameplay control wise the game had no issues and showed itself off well. Combat was not as smooth as the Prince’s either which was a shame, instead you found yourself taking on a single opponant at a time even when surrounded by a number of enemies.

Played correctly information was gleamed by finishing tasks, and could be reviewed to provide you with a stealthy way in (avoid these guards, this wall is unguarded, the people here move at this time of day, this provides you with a place to leap in and kill your target… etc.), but as most people discovered the game could be played easily if you just went in gung ho and hacked the crap out of your targets with a sword or hit them hard with your assassin blade.

Screed succeeded the best when you did exciting missions like these (and even more so if you did it properly), but sadly these were at times few and far between. Instead repetition would set in on laborious work and it was a game that I found myself enjoying, but if only in short blocks of an hour or two at most. The first bit of the game that I’d played through had a good pace, setting up story and getting you into the flow of the missions and this is why I’d been keen enough to make a purchase, however the pacing slowed not much longer after where I started by the time I brought the game.

Still there were great gems of ideas in place, and the story when it was moving forward, was enough to keep me interested into finishing it to the end. The story did a little of an about face by the end of the game handing out a great deal of mystery and a cliff hanger ending. I still own the original game, but I have no real desire to playthrough it again and had it not dropped in price so quickly I probably would have sold it or traded it in by now. Instead I’ll stay on my shelf until such time as I sell a bunch of PS3 titles off.

Instead however it also managed to keep me keen to play a sequel, one that would hopefully keep the good of the original game and improve greatly on everything else… I would not be disappointed….