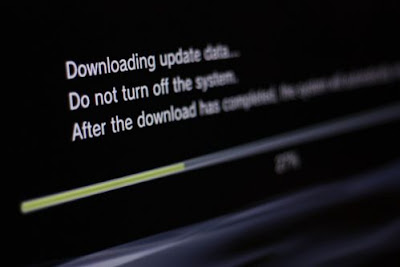 It’s been a while since I’ve written in here, but not through lack of want… just been busy with work, friends coming to stay, and most of all gaming. Which of course leads me the point of this update.

Slow downloading, annoyingly large, and almost constant game updates for PS3 titles I own. In fact as I write this right now, one is downloading to my PS3… 226MB in size, the time for the download it tells me it has left currently as I write (at so far 2% downloaded) is 167 mins… anyone feel like watching the extended cut of one of the Lord of the Rings films while we wait? :p

Sadly, while I’d be okay with this on a infrequent basis, it seems to be a overly frequent thing. The issues that make it worse are that you can’t background download the patch, and then just install it later. And unlike the 360, you can’t download the update off the net and transfer it across – you have to do it while putting the game in.

I currently have 26 PS3 games on my shelf, which includes a couple I’ve borrowed from a friend at this time… and in the last month or so I’ve actually played quite a lot of them. Here is a list of updates I’ve had in just the past month or two of games I’ve put in the PS3:

Aliens Vs. Predator
Brand new purchase, put the game in… update straight away. Moderately sized and downloaded fast. This won’t be the only event like this.

Assassin’s Creed II
Patched around the time I was halfway through my playthrough after buying it to fix glitches, including a game ending one. So I was happy to get it.

Bayonetta
Borrowed from friend. Patch still to be installed which fixes some issues and allows you to install the game to the HDD.

Burnout Paradise
Patch is still to be downloaded of around 400MB in size, it was too slow and long for me to care about when last loading. It adds extra content into the game and fixes some stuff, but it was going to take over 200 mins. Legitimate reason I guess.


Call of Duty 4 Modern Warfare
I swapped this for another game so I only played it for the first time about a month or so back. Small and quick patch.


Ghostbusters: The Video Game
Patched when I brought it, although it was after the games release. Patch was for fixes plus correcting visuals apparently closer to the 360 version. I felt this one was worth it.


Grand Theft Auto IV
Showed my friend this because he’d never played it. Patch to download still, but haven’t. I think this one was the one that added trophies and fixed some issues with Multiplayer. Quite and old one, but seeing as I hadn’t put the game in for quite a while it’s not surprising.

Heavy Rain
Another brand new purchase but patched on day one. It’s the patch I’m currently downloading now, trying to play the game for a bit before work. But that wont happen today.

Lego Star Wars: The Complete Saga
I would suspect this is an online update more than anything, but seeing as I haven’t played much of this since I originally got it – not surprising it needs some sort of update to a degree, but considering there was nothing I could see wrong with it and it’s not the type that probably needs it – then I don’t see why either.

Resident Evil 5
Another legitimate reason. Patched the game to add in some content, support the new DLC content and change save files to Ver 2.0, so I’m fine with that. Still haven’t downloaded it, but still of point.


Rock Band
I went to transfer my songs from Rock Band 1 to 2, and before I could do it I had to patch the first game.

Rock Band 2
Once I’d been able to transfer my songs to HDD, I loaded up RB2 and…. another update straight out of the box. Was brand new here in NZ at the time, but the game had been out overseas for over a year at least so it seemed like legitimate reason to have had time for an update.

The Orange Box
Large patch on start up. Had been a long time since I’d last played TOB, so it was probably for good reason – and I’d suspsect mostly the online support for TF2.

Uncharted 2: Among Theves
Two updates in a week…. one was an old update from the very end of last year, which I’d not gotten because I’d stopped playing a week or so before the update originally arrived. Downloaded and finished most of the games trophies, was very close to 100% and then they updated again… which affected the Multiplayer and added in new MP trophies the following week. The changes to how the MP works haven’t gone down well with players as well.

So around half of the games on my shelf have had updates that needed to be downloaded, and while it looks like it means half of them don’t…. it’s purely because I haven’t put the other games in there. While older titles I have are less likely to have them, there could be a few that do.

UPDATE: Today the PSN crashed for people with older “Fat” PS3’s much like myself, and my trophies have disappeared from AVP. Oddly enough the PSN seems to keep these updates separate and loading in, you could still potentially patch games. However the other issue with the fault is that certain games wont let you play them, even offline – like AVP and Heavy Rain. What a day to make this rant huh?